Your browser does not support JavaScript!
Pennsylvania Senior Better-Ball Championship 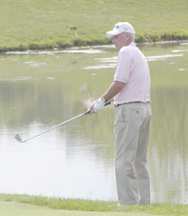 GETTYSBURG, PA - Today's final round of the Pennsylvania Senior Better-Ball Championship presented by Your Pennsylvania Toyota Dealers began with the defending champions, Paul Schlachter and Bill Kunsman of The Club at Nevillewood, and Lance Smith and Bob Newcomer of Out Door Country Club dead locked at the top of the leaderboard. The Links at Gettysburg, par 72, 6,500 yards, played difficult with a light but constant breeze and plenty of hazards.

Three birdies, hole No. 4, 5 and 8, gave Schlachter and Kunsman a two-stroke lead over Smith and Newcomer of Out Door County Club heading into the final nine holes.

Schlachter and Kunsman would see the lead diminish when Smith and Newcomer birdied holes 10 and 11.

Only to regain the lead with a birdie on the par-5 14th hole.

One stroke behind, Smith and Newcomer needed a birdie on the 18th and that is just what Lance Smith supplied to send his team into a sudden-death play-off with Schlachter and Kunsman at 9-under par.

In the sudden death play-off the two teams traded birdies on the par-5 18th and par's on the par-3 12th. Bob Newcomer made an 18-foot birdie putt on the par-4 13th to seal a victory for the Out Door Country Club duo.

The round of the day was posted by Don Ashley and Mark Shuman of Philadelphia Country Club. The team made eight birdies on their way to carding a 7-under par 65.

GETTYSBURG, PA - Bill Douds and Charles Watterson of St. Clair Country Club captured the Pennsylvania Super-Senior Better-Ball Championship. The team fired four birdies and two bogies on the way to carding a 2-under par 70 for the second straight day and a 4-under par total.