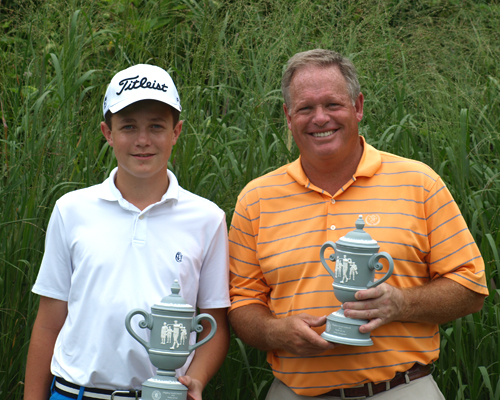 MALVERN, Pa. - Lehigh Country Club's Bob Beck and Bobby Beck shot a blistering 136 (-6) over 36 holes in a Chapman format to breeze to a win in the Junior division of the 6th Pennsylvania Father-Son Championship, presented by Allegheny Health Network. The Becks won the championship by 11 strokes over two days of competition at White Manor Country Club for the junior division, in which the son has to be age 17 and under.

After a solid 2-under par score of 69 in Monday's first round, the Becks followed up with a 67 in round two to win the title. In doing so, they took advantage of the tournament's unique format. In the Chapman format used, both players tee off. After that, each hits the other's ball for their second shot. From there, the two players choose one ball to play and then alternate shots until the ball is in the hole.

"If you drive it in play in this format, the other guy should have a pretty good shot at the green on most holes," Bob Beck said. "We were able to do that and take advantage of that today."

The Becks were consistent throughout the two days, playing each nine hole segment under par. In the second round, they rolled in seven birdies putts among the 11 birdies they made over the 36 holes of competition.

Bob Beck concurred, saying that the key was getting putts to fall.

"We were able to hit greens all day, and fortunately we could roll a couple of them in," Bob Beck said.

Coming in second place was the Waynesborough Country Club duo of Andrew Desjardins and Jay Desjardins, who teamed up to make five birdies en route to a score of 147 (+5).

But in the end, it was the Becks who claimed the top honors in the division.

"Things went pretty well for us today," Bob Beck said. "It feels great to put it all together and win this with Bobby."