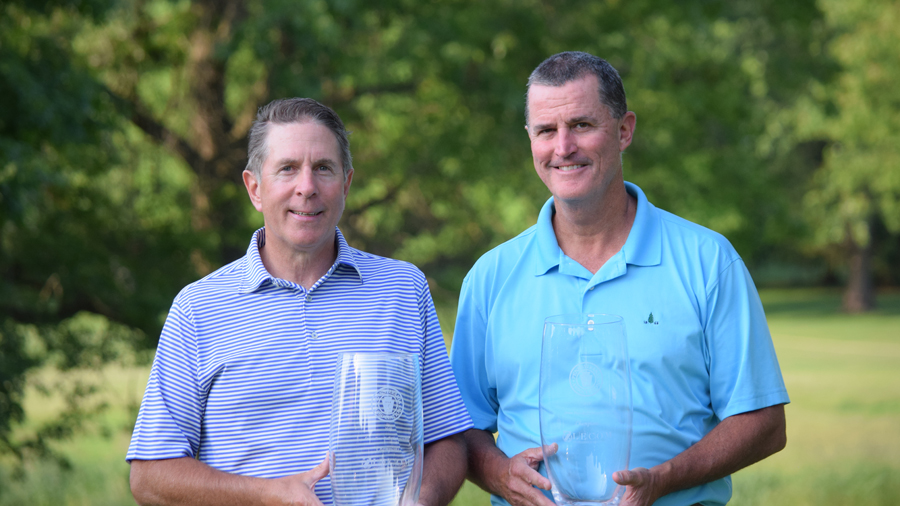 LEBANON, Pa. - In a battle of past champions, Scott Mayne and Ron Weaver held off Bob Beck and Bill Charpek by making par on the second playoff hole to win the 27th Pennsylvania Senior Four-Ball at Lebanon Country Club. Weaver and Mayne fired a 36-hole score of 138 (-6) to win for the second time in the championship, which was presented by LECOM.

"It felt good that I was able to support my partner," Bent Creek Country Club's Weaver said. "Everyone knows his ability to make birdies is outstanding so it felt great to give him a chance to do so today."

The winners of this event in 2015 at the Country Club of York, Weaver and Mayne began the second round two strokes off the lead after an opening round of 70. They were paired with the defending co-champions, Bob Beck and Bill Charpek. It was evident early on that each pair was going to play a big role in determining the champions of the event, as Beck and Charpek fired a 4-under par 32 on the opening nine to vault up the leaderboard. Weaver and Mayne were just 1-under on that front side, but turned it on when the teams moved to the back nine.

After opening the back side with a par, birdie and bogey on the first three holes, Mayne then turned it on with four straight birdies. At the same time, Beck and Charpek went 1-over par on that stretch, resulting in a huge five-shot swing.

When play moved to the 18th hole, Weaver and Mayne had a two-shot advantage over Beck and Charpek. But Charpek's birdie combined with the bogey from the Weaver/Mayne side evened the two sides at 6-under par for the championship, resulting in a sudden death playoff.

The teams returned to the par-4 18th hole to start the playoff. Beck lost his drive left, leaving his partner alone to complete the hole. Charpek was up to the task, with a nice two-putt par. After hitting his tee ball in the left rough, Weaver's approach was just short of the green. His third shot was a chip to about five feet, and with the pressure on, he rolled in the putt to extend the match.

The two pairs moved back to the 17th hole, a 306-yard par 4. Beck's drive landed on the bank of the right fairway bunker with an awkward stance and his second shot came up short of the green. Charpek, meanwhile, hit his approach over the green on to an exposed rock area. Beck then hit his pitch to the false front of the green, where it proceeded to roll back off the green. Charpek chipped off the rocks and his ball rolled off the front onto the fringe.

Weaver, meanwhile, had a 20-footer for birdie and left that about three feet short. After Charpek missed his par putt, Weaver's par look was for the win, and he calmly converted it to give the duo the win.

"With the way they were playing on that front nine, we were fortunate to win," said Mayne, of LedgeRock Golf Club. "We caught fire on the back."

In the Super-Senior competittion, Centre Hills Country Club's Michael McKinney and Skip Moerschbacher overcame a four-shot deficit with a second round bogey-free 65 to win the championship. The duo was off early at 8 a.m. off of the first tee and made the most of it, with seven birdies on the round after making just one in the first round.

McKinney made two of the birdies, on the par-4 5th and the par-3 14th hole, while Moerschbacher sank five birdies on the day, on holes 4, 7, 10, 12 and 18. With the big deficit coming into round two, the duo joked that everything went accordingly in the second round.

"That was our game plan," Moerschbacher said of the second round 65. "We didn't do so well yesterday but we made up for it today."

The Pennsylvania Golf Association would like to thank the staff and membership of Lebanon Country Club for the hospitality during the championship. Thanks as well to LECOM for the sponsorship of the championship.