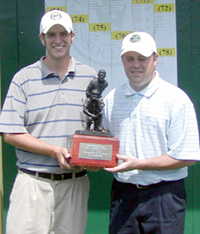 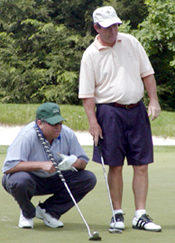 MOOSIC, Pa.-For the second straight year the Pennsylvania Better-Ball Championship and Senior Better-Ball was reduced to an 18-hole event. It took nearly two full days for the 180-player field to finish their 18 hole round. Play began today at 9 a.m. when 76 players resumed their round that was delayed by rain and sever lightning yesterday afternoon. After one more short delay because of another fast-moving storm the championship was finally completed at 2:30 p.m. and after all was said and done Sean Duffy and Jeremy Graham fired a 6-under 65 to take the Amateur division title by one stroke over three teams. The 6-under 65 posted by Bernie Zbrzeznj and Dave DeNezza yesterday was good enough to take the Senior division title by two strokes over three teams.

Duffy, 31, is a former touring professional while Graham, 20, will be a junior at Marshall University in the Fall. Both players play out of Frosty Valley CC in Danville.

Due to overwhelming demand and for only the second time in the event’s history, lowest combined handicap index in each flight was used to determine the 90-team field. The other year was 1997 when the championship was held at Oakmont Country Club.