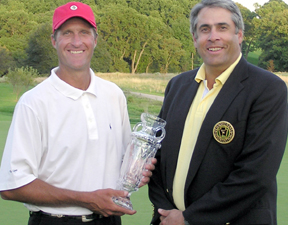 Chris Lange of Overbrook GC and Glenn Smeraglio of Yardley CC tied for second a shot back. Three others finished at 5-over par to round out the top five.

"I think the state events are penultimate for amateurs, exclusive of USGA events," said Knapp, 42, of Oakmont, Pa. "This means a lot. I felt I haven’t done enough, in terms of victories, in state events."

Maybe Knapp’s win total isn’t what he wants it to be, but his resume is truly remarkable. 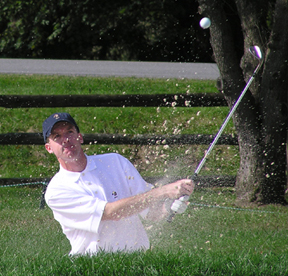 In addition to capturing three Middle-Amateur titles (1996 at Lancaster CC and 1997 at Longue Vue Club), Knapp has finished in the top five in the last 10 state amateurs he’s competed in, including a victory in 1997 at the Country Club of Scranton, and has qualified for a remarkable 17 USGA championships. He’s a household name in national circles.

The Middle-Amateur Championship changed to a 36-hole, stroke play format this year. Prior, the champion was determined through medal play qualifying and a match play draw.

Knapp, who was in a six-way tie for the lead after carding an opening-round 72, posted a level-par 71 to secure the title. 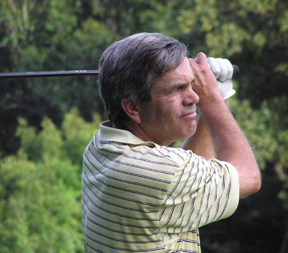 "I was just trying to find a way to make a bogey [on the difficult 16th]," said Knapp. "I got it into the right rough and tried to hit a little chip 9-iron to get it to roll up. It rolled up [almost] onto the 11th hole." Knapp chipped out sideways and then missed his five-foot bogey opportunity.

"I was trying to shoot 68," said Smeraglio, who carded four birdies, a double bogey and a bogey. "I birdied No. 1 and No. 2 and was off and running. Then I hit a very uncharacteristic [block drive] into the woods on No. 9 and had to take an unplayable."

Lange carded four birdies and two bogeys on his round.

The 2005 Middle-Amateur Championship is set Sept. 12-13 at the Country Club of York.