Your browser does not support JavaScript!
Sikora Sizzles at Pennsylvania Open 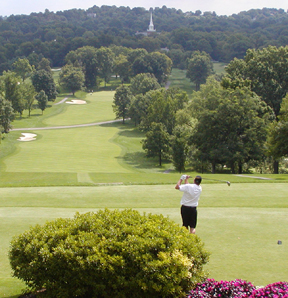 Pittsburgh, Pa. - Ryan Sikora, an assistant pro from Edgewood CC, continued his stellar play with a final round 69 to win the Frank B. Fuhrer Pennsylvania Open at Pittsburgh Field Club (par 71, 6,636 yards). He finished four strokes ahead of three-time past champion Bob Ford of Oakmont CC.

Sikora, 26, started the day with a three-stroke lead after rounds of 67 and 68. "I thought I needed to shoot under-par going in," said Sikora. His lead was trimmed to one after he bogeyed the sixth hole but he pulled away after birdies on 11, 12, and 13.

"The chip-in at 12 was the turning point and then the birdie on 13 was great. We [he and his father who was caddying for him] just tried to hit the middle of the green coming in and make pars," said Sikora. The victory was the first as a professional for Sikora who is in his first year in the section.

Stu Ingraham of Overbrook GC and defending champion Steven Wheatcroft finished in a tie for third at 4-under-par 209.

Three players finished in a tie for low amateur at a total of 3-under-par 210. They were Blaine Peffley of Lebanon CC, Sean Knapp of Longue Vue Club and Greg Pieczynski of Irem Temple CC.

Yesterday's second round included a two-hour delay because of inclement weather and was also marred by a power outage at the Club. Three players had to finish their second round this morning before the final round began at 9:00 a.m. A total of 46 players made the cut and of that group 27 were professionals and 19 were amateurs. The professionals were playing for a total purse of $50,000.