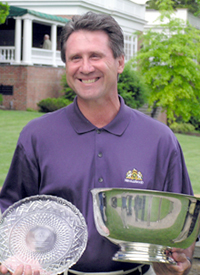 Schlachter, 55, of Pittsburgh, earned his first Pennsylvania Senior Amateur Championship (55 years of age and older) title with a final score of even-par 144 on the difficult Grace Course with its treacherous greens. Schlachter carded rounds of 68-76 to distance himself from the other 131 players in the field. 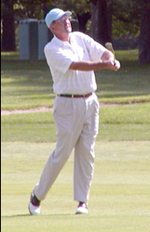 He adds the Senior Amateur title to a list of accomplishments that already includes the 1988 Pennsylvania Amateur Championship and five USGA National Championship appearances.

"It’s a big deal to win both the state Amateur and Senior, especially for the resume," said Schlachter. "It’s terrific and at a place like this, it’s wonderful. Pennsylvania’s [viewed as] one of the top states for golf.

Thomas R. Davis of Saucon Valley CC and Michael Sanger of Merion GC tied for second at 146, two strokes behind the leader. David K. Brookreson of Huntingdon Valley CC and Peter Smith of The Kahkwa Club placed fourth at 151. 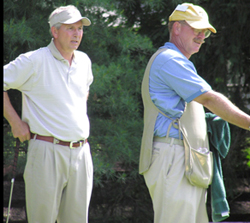 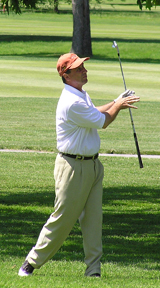 "I kept making the wrong choices with my irons," said Schlachter, who registered only nine greens in regulation. "I didn’t hit it solid. I was just hanging on. I bogeyed the second hole (No. 2, par 4, 384 yards) from the right rough and was never sharp the rest of the day."

A constant breeze, those lightening greens and the pressures of a final round appeared to take its toll on everybody, however.

Davis, who began play in the afternoon, and after Schlachter finished, grabbed the lead at the turn, knowing what he had to do. Starting on the back nine, Davis netted birdies on No. 16 (par 4, 425 yards) and No. 17 (par 4, 410 yards) to finish the front with an impressive 1-under-par 35. At the time, he led Schlachter by two strokes. 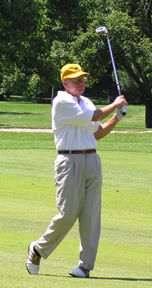 "I’ve never been in that position before," said Davis, 55, a rookie when it comes to state championship tournaments. Jokingly, he added, "I kept saying to my caddie tell me when we are having fun."

The fun stopped on No. 3 (par 3, 180 yards). His 18-degree hybrid club from the tee stayed straight instead of with the draw he needed. He failed to get up and down from the right bunker.

A drive left Davis with 155 yards. His 8-iron to a tight hole location came up a yard short and into the left bunker. He just missed saving par. 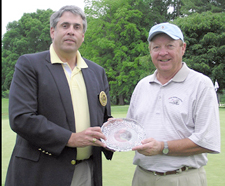 The difference between victory and second place came in his sand game. Davis had four sand save opportunities and failed to convert any of them.

Mike Rose of Ashbourne CC registered the highlight of the day. On No. 14 (par 3, 150 yards), Rose holed out for an ace with a 7-iron. Maybe even more impressively, the other two players in his group, Peter Smith of The Kahkwa Club and Todd R. Kennedy of the CC of York, both posted birdies on the hole.

It is the first Super-Senior Division (65 years of age and older) for Smith.