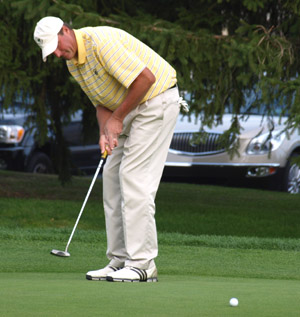 taps in to win the Championship

Sunnehanna Country Club, in Johnstown, PA, played host to the 16th Pennsylvania Golf Association Middle-Amateur Championship. Sean Knapp has played in 18 Sunnehanna Amateur Championships. Needless to say, he didn't need a practice round to figure out the difficult greens.

"I have played in over 100 competitive rounds at Sunnehanna, and it has really been a struggle for me the last few years. I really thought it was my tournament to lose through 12 holes today, and I lost it down the stretch. I was lucky to save a par on 15, or else I would have played myself out of it." said Knapp.

It wasn't an easy victory. After 36 holes of play, four competitors were tied at 3-over-par, 143. Joe Corsi, of Hannastown Golf Club, was first to post a score. He finished the first day with a 73 and followed it up with a stellar even-par score of 70, after rolling in a clutch birdie putt on the 18th green. 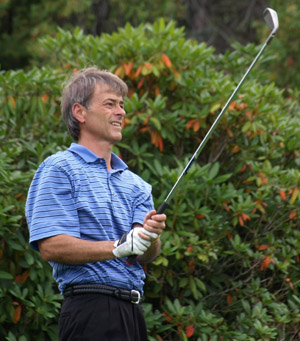 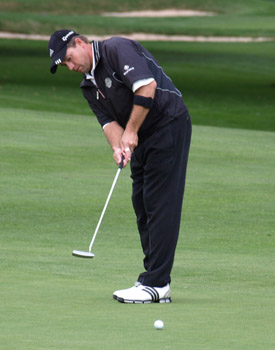 William Smith, of Chambersburg Country Club, and Sean Knapp, of St. Jude Golf Club, were paired together for the second round and both came in with scores of even-par 70 to join Corsi in a tie for the lead.

Gregor Meyer, of  Pittsburgh Field Club, was last to finish, and had a difficult 20 foot birdie putt to clench the victory. It rolled over the edge and he tapped in to continue his quest for the Championship.

The players headed to the 450 yard, par 4, slight dog leg left, to begin the playoff. Corsi and Smith found the rough off of the tee as Knapp and Meyer striped drives down the fairway. That tee shot seemed to be the difference, as Corsi and Smith failed to advance to the second playoff hole.

The 373 yard, par 4, 18th hole was the final stage. Knapp hit a 3 iron just short of the bunker in the first cut of rough with 146 yards left, and Meyer found the fairway with his 3 wood, which left him with 100 yards. Knapp's approach found the back right corner of the green leaving him with a 12 foot putt for birdie. Meyer's wedge came up a few feet short and caught the lip of the greenside bunker.

Meyer's bunker shot did not release and he was left with a dicey 10 foot par putt. Knapp narrowly missed his birdie try and tapped in to assure that he would at least advance to the next playoff hole. Meyer's putt rolled over the right edge of the hole and sealed the win for Knapp. 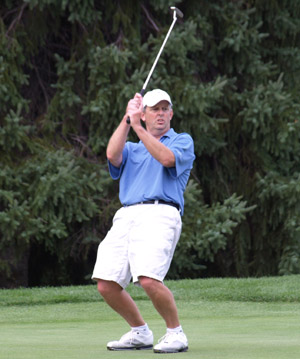 "It was more of a relief than satisfaction to win this event at Sunnehanna. I've played there so many times, that I feel like I should always compete well. Although, I am thrilled to have won two state championships in one year," remarked Knapp.

Sean Knapp has been selected to the Pennsylvania Golf Association's 2009 USGA State Team, which will be held at St. Albans Country Club is St. Louis, MO, on September 23-25. Nathan Smith and Mike Van Sickle round out the team.

The 2010 Middle-Amateur Championship will be held at Lehigh Country Club.