Your browser does not support JavaScript!
RESULTS 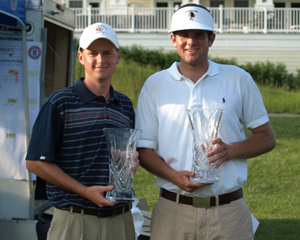 Matt Moot (left) and Zak Drescher with their

Bedford, PA - Matt Moot, of Windber Country Club, and Zak Dresher, of Lancaster Country Club, cruised to a record breaking championship victory, posting rounds of 62 and 64, respectively. The previous record was 130. Their first round was nothing short of phenomenal, carding 3 birdies and an eagle on their opening nine holes to set the tone for the event. They finished their day 10-under-par (5-under-par over the last 4 holes). Matt Moot punched a six iron on the 170-yard, par 3, 17th hole, and initially thought he hit it fat...but regardless of how it came off of the face of the club, it went in!

On the first day of competition, the early leaders in the clubhouse were the father-son duo of Brandon Detweiler and Marlin Detweiler, of Lancaster Country Club. They posted a fine round of 6-under-par, 66, which included 6 birdies and no bogeys. Their lead did not last long, as Michael Kania, of Overbrook Golf Club, and Austin Wolf, of Bent Creek Country Club, posted a 7-under-par, round of 65. 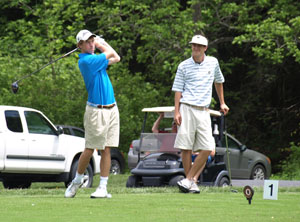 The low numbers did not stop coming in, even with an extremely wet, difficult course. The rough measured in the "US Open-esque" category for both days of competition due to one and a half inches of rain the day before competition. The Bedford Springs Resort's Old Course features five par 5's, which measure anywhere from 519 yards to 617 yards. With wet conditions, the 617 yard, par 5, 13th hole, played more like 700 yards!

Patrick Ross, of Elmhurst Country Club, and Peter Nelson, of Glen Oak Country Club, carded a first round 6-under-par, round of 66 to put some more pressure on the leaders for the second round. There were 7 teams within 5 shots of the leaders after day 1. 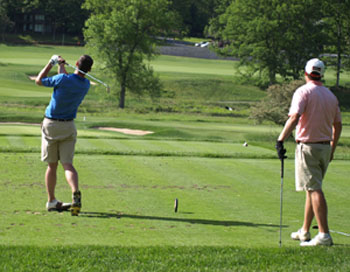 Peter Nelson (left) and Patrick Ross on the 14th tee

The rough kept growing and the wet course did not let up for the second round, but you wouldn't know it by the scores. Wes Turiano and Derek Hayes, both from Sunnehanna Country Club, tried to put a scare into the field on the second day of competition. They came out on fire, rolling in 7 birdies on the front nine for a nine-hole tournament low of 7-under-par, score of 30 (the front nine is par 37). On paper, they had moved into a tie for the lead, but that was before the leaders made the turn, and posted a 5-under-par, front nine 32 to extend their lead back to 5 shots. 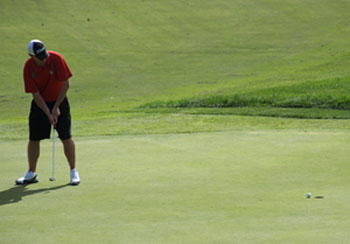 This must have been what Wes Turiano (pictured) and

Derek Hayes looked at all morning (their putts dropping).

It was cruise control from there on for the leaders. They finished with a pair of 32's for their final round to shatter the tournament scoring record by 4 shots. The previous record was held by Jason Bernstein and Alan Borowski, at 130, when they won the event in 2007.

The 2011 Better-Ball Championship will be held at the Country Club of Scranton on May 23-24.