Your browser does not support JavaScript!
Scoring 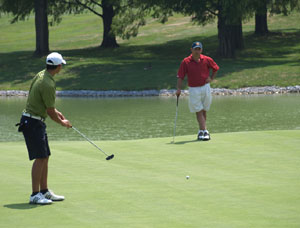 Deryl and David Denlinger used some solid ball striking to win the inaugural Pennsylvania Golf Association Father & Son Championship today at Hershey Country Club. By their own recollection, the Denlinger’s didn’t miss a green in regulation the entire tourna­ment en route to posting a sec­ond day score of 2-under 69 and a final score of 6-under 137. That gave them a two-stroke victory over the Philadelphia area team of Jack and Michael Gregor. The Denlinger’s, from the Lancaster area, bogeyed just two holes over the course of the two-day event, both on three-putts. 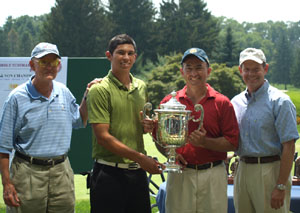 The Denlinger’s were tied after Tuesday’s first round with the Philadelphia duo of Grant and Jonathan Liu, but came out flying Wednesday with birdies at the par-5 1st and the par-4 3rd. The Liu’s, meanwhile, went backward, bogeying the two opening holes to fall out of contention. Playing two groups in front, the Gregor’s began the day three shots off the pace. They matched the Denlinger’s front nine score of 34, but couldn’t rally on the back side. Their score of 3-under 68 was low for the day at Hershey’s East course. Tuesday’s first round was staged at Hershey Links.

”We just kept it in play and always had two balls on the green. We came in here think­ing 68-68 would win it”, said Deryl Denlinger, just a shot off from the 68-69 he and son David recorded to win the title. 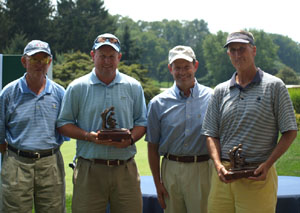 captured the Senior Division (father's over the age of 65) 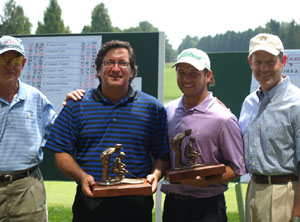 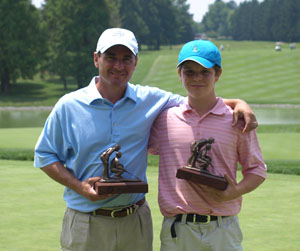 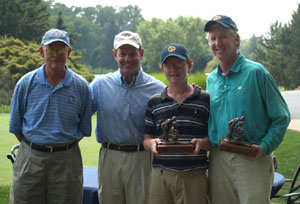 Patrick and Patrick McGrath won the 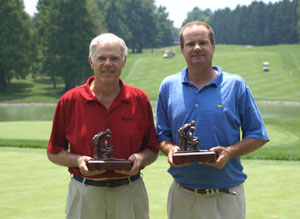 Warren and Jay Deakins won the

The Father & Son Championship is played under the Chapman Format. Clarification of format: both players hit their drives off the tee, for the second shot player A hits player B’s ball and player B hits player A’s ball, for the third shot the players select which ball they would like to play and play alternately until the ball is holed. The net portion of the event is played at 60% of the A players handicap and 40% of the B players handicap.

The 2011 Father & Son Championship will head back to Hershey Country Club on a date to be decided.