Your browser does not support JavaScript!
Championship Scorecards

Jim and JD Hughes pose with the Davis Cup

Bedford, Pa. – Over a hot and humid two days at the Omni Bedford Springs Resort, 48 Father & Son duos competed at the 5th Father & Son Championship on July 22-23.  Jim and JD Hughes, Carlisle Country Club, shot a two round total of 10-under-par 68-66-134 on the par 72 layout to tie clubhouse leaders David and Marshall Brown, St. Clair Country Club.  The Brown’s closed strong Wednesday with the low round of the championship and ended with a total of 70-64-134.  On the first playoff hole, No. 18 (par 4, 356 yards) JD Hughes rolled in a 15-footer for a birdie to claim ownership of the Davis Cup, named in honor of William R. Davis and Mike Davis.

It is safe to say that the 18th green is a new favorite for JD Hughes.  Not only did he sink the 15-footer for birdie to win the playoff, but he also drained a longer one to force the playoff with the Brown’s, who finished in the group ahead.  David and Marshall made an astounding 10 birdies on the day, including five in a row from #13-17.  After a brief weather delay while playing their final hole, a crucial up-and-down was needed to post the clubhouse lead.

Asked to sum up the day, Jim Hughes said, “The big thing was we got around today with no bogeys, and we missed just one green and were able to get up-and-down.  JD hung in there all day and made some clutch putts, and even though it wasn’t his best putting day, he saved the best for last, which was great.”  JD Hughes added, “We got off to a great start, turned at 4-under for the day, then let some opportunities slide on the back.  Obviously, the last two putts were cool, it was awesome.”

The first round leaders, Arnold and Arnie Cutrell, Greensburg Country Club, played two solid rounds of golf and finished in third place at 9-under-par 67-68-135, just one shot back.

Taking home 1st place for lowest Net score were David and Parker Lucas, Greensburg Country Club, with a net 130.  Second place Net was won by Joe Ruby, Nemacolin Woodlands Resort, and Marc Ruby, Uniontown Country Club, who finished with 131.  There was a tie for third Net at 133 between Ken and Zack Ross, Hannastown Golf Club, and Dan and Daniel Woods, Olde Stonewall. 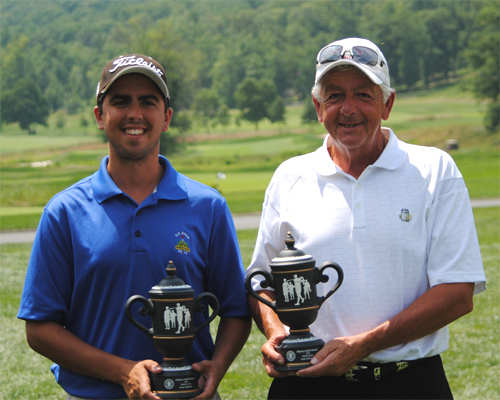 Don and A.J. Donatoni stormed back to capture the Senior Division in a scorecard playoff over Jay and Warren Deakins

Don and A.J. Donatoni, White Manor Country Club, shot the round of day on Wednesday with a 6-under-par 66 to post a total of 2-under-par 76-66-142.  They edged Warren and Jay Deakins, St. David’s Golf Club, in a scorecard playoff for first place.  The Deakins’ however, did not go home empty-handed, as they wound up first in the Senior Net Division at 128.  Doug and Brian Neely, Edgewood Country Club, fired a 1-under-par total of 75-68-143 to finish third in the Senior Gross Division.  Rounding out the Senior Net division, Jim and Brad Usher, Sewickley Heights Golf Club,  and Lee Oxman, Moselem Springs Golf Club, and Nate Oxman, Talamore Country Club, finished tied for 2nd place at 132. 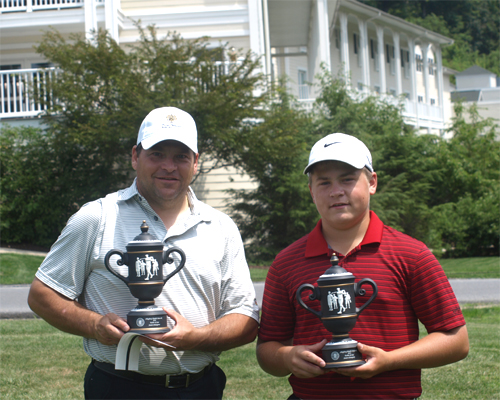 Bill and Billy Rosemeyer, Treesdale Golf and Country Club, took home the Junior Division championship as they held off a charge from Campbell and Michael Wolf, of Carlisle Country Club.  Each duo scored significantly better from Day 1 to Day 2 as the Rosemeyer’s improved 5 strokes from a 79 to a 74, while the Wolf’s improved 10 strokes, posting a 73 on Day 2.  The Wolf’s improvement was enough to earn them 1st place in the Junior Net competition. 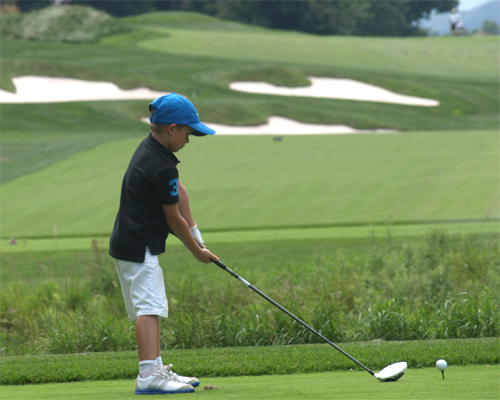 Special thanks go out to Director of Golf Ron Leporati and his entire staff, as well and Golf Course Superintendent Dave Swartzel and his entire staff.  The 5th Father & Son Championship was sponsored by the Allegheny Health Network.  The Father & Son Championship was first introduced in 2010 and is played annually for The Davis Cup, named in honor of William R. Davis, of Chambersburg Country Club, and his son, Mike Davis, Executive Director of the USGA and 1982 Pennsylvania Junior Champion.