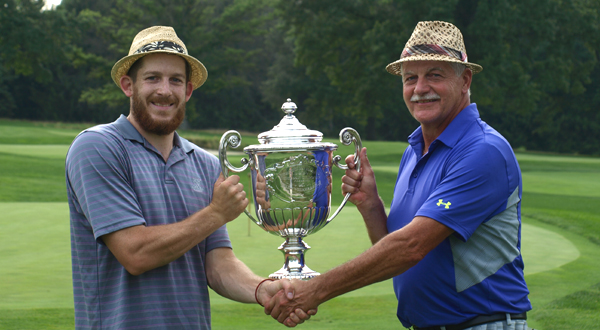 MALVERN, Pa. - Beginning the second round of the 6th Pennsylvania Father-Son Championship at White Manor Country Club, Scott McNeil and John McNeil had a two-shot lead on the rest of the field. But after each player hit his tee shot into the weeds, the lead looked like it could evaporate quickly. A pair of second shots didn't instill much more confidence, as only one player got it near the green. However, in the first sign that it might have been their day, Scott McNeil chipped in for birdie to extend the lead. From there, the duo hung on, carding a 69 on the day and a 36-hole score of 136 (-6) in the Chapman format to win the championship, which was presented by Allegheny Health Network.

"We had a blast playing together," Scott McNeil said. "Playing this golf course in this format really tests your patience."

The McNeils needed that patience, as hot on their heels was the home course pairing of Don Donatoni and his son, A.J. Donatoni, who shot a blistering 31 on the back nine to finish at 66 for the day and 4-under for the championship.

"We just didn't quite get it done on the front nine today," Don Donatoni said.

After the early birdie on the first hole, the McNeils parred five consecutive holes in the Chapman format, where both players tee off, and after that, each hits the other's ball for their second shot. From there, the two players choose one ball to play and then alternate shots until the ball is in the hole. On the par-4 seventh hole, the team extended the lead. Scott McNeil, a member of Bala Golf Club, drove it left of the green. His father then chipped up to about six feet and Scott dropped the putt in the cup for another birdie. After a bogey on No. 10, they capitalized again on the par-5 11th hole, laying up to set up Scott's approach shot to 6 feet, where John converted the uphill putt for another birdie. After bogeys on No. 12 and No. 16, the championship was in doubt, mostly due to the excellence of the Donatonis.

"We just went out there and played the best we could," Scott McNeil said. "And we had no idea they were going to shoot 31 on the back!"

But on the par-5 17th hole, John McNeil hit a drive down the middle and Scott followed with a 215-yard four iron to 20 feet and then they converted the eagle putt to extend the lead by another pair.

For the Donatonis, it was too little, too late. A birdie on No. 7 began a stretch of five birdies in seven holes, though included in that was a bogey on No. 9. After birdies on 16 and 17, they parred No. 18 to shoot 66 on the day, tying the team of Robert Galbreath, Sr. and Robert Galbreath, Jr. for the low round of the tournament, as the Galbreaths finished third after an equally impressive 66 in round two.

The Pennsylvania Golf Association would like to thank the staff and membership of White Manor Country Club for their hospitality during the championship.