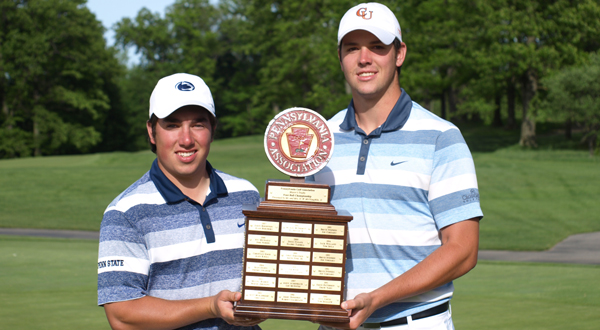 INDIANA, Pa. - It was a tale of two holes down the stretch at the 26th Four-Ball Championship at Indiana Country Club, presented by Allegheny Health Network. The team of Craig Hornberger and J.D. Dornes went into the par-3 15th hole tied at 12-under with the first round leaders, Grant Engel and Thomas Steve. But Dornes rolled in a 12-foot birdie putt while Engel and Steve bogeyed the hole for a huge two-shot swing. Then, with the lead at just one shot headed to the par-5 18th hole, Hornberger came through with the shot of the day, blasting a 3-wood from 260 yards to eight feet, where he made the eagle putt to clinch the victory for the duo from Lancaster with a 36-hole score of 127 (-15).

"That was the best swing I made all day," said Hornberger of that approach on 18. "I couldn't have hit it any better."

"J.D. and I both played solid all day, and for the whole tournament," said Hornberger, who plays out of Lancaster Country Club. "We made no bogeys as a team for the entire 36 holes, which was tough because we were grinding all day today."

Dornes, of Meadia Heights Golf Club, credited his teammate for taking the pressure off with the approach on the 18th.

"That was such an awesome shot," said Dornes. "We could finally relax a bit after Craig hit that approach."

The victory overshadowed some other outstanding performances on the afternoon. The winning team's second round total of 64 was equaled by the team of David DeNunzio and Ronald DeNunzio of Greensburg Country Club. And Pinecrest Country Club's Nathan Smith, fresh off of his win in the USGA's inaugural Four-Ball Championship, had an ace on the par-3 third hole from 208 yards out.

The winning duo gave credit to the golf course as well, with Hornberger saying "I really liked the golf course. It's really scoreable for a better-ball and the greens were fantastic.". Meanwhile, Dornes heaped praise as well, saying "It was a really great course for this tournament. Every hole tells another story."

The Pennsylvania Golf Association would like to thank the staff and membership at Indiana Country Club for their hospitality and cooperation during the championship, and to Allegheny Health Network for their sponsorship of the event.