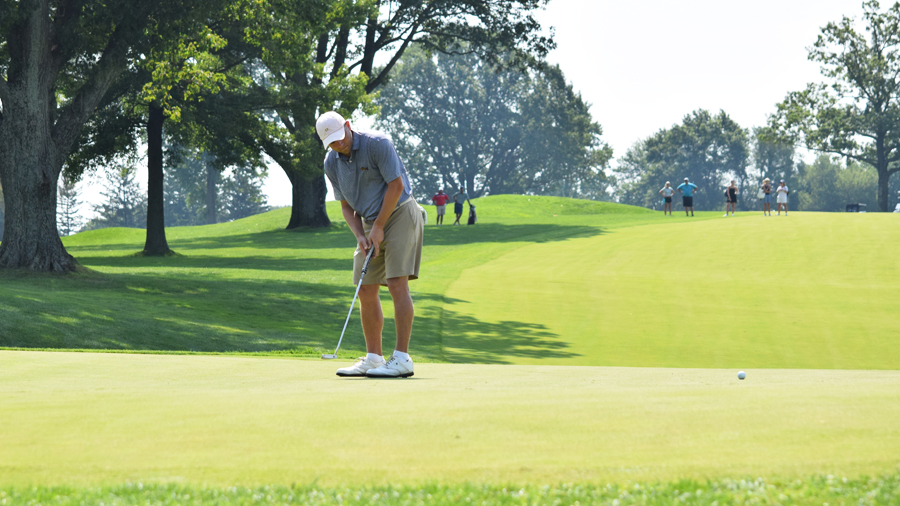 NEWTOWN SQUARE, Pa. – A college coach is tied with a college player after round one of the 106th Pennsylvania Amateur at Aronimink Golf Club, but they took different approaches on their way to rounds of 66. Drexel University golf coach Ben Feld was aggressive in the morning to post the clubhouse lead, while Stanford University rising redshirt sophomore Nate Menon battled windier conditions in the afternoon and adjusted his game accordingly to get to the same number. But at the end of the day, each ended at 4-under to set the pace in the first round of the 54-hole championship, which is presented by LECOM.

By his count, Green Valley Country Club’s Feld has played four or five competitive rounds at Aronimink Golf Club. Also by his estimate, he’d never broken 75 in any of the previous rounds. But as is typical in the game of golf, sometimes the breaks go your way and today was that kind of for Feld.

The round of 66 tied him with LedgeRock Golf Club’s Menon, who continued his excellent summer by matching Feld’s round in the afternoon.

“I kept telling myself that with so many good players out here, I had to go try and get more birdies,” said the 28-year old Feld, who teed off hole No. 10 in the morning’s opening group at 7:30 a.m. in the first round of the 54-hole championship.

Feld’s aggressive mindset showed with early birdies on No. 11 and No. 13 to quickly move to the top of the leaderboard. On the par-4 11th, his approach shot was under the hole about 20 feet from the cup, and he rolled in the birdie putt. Then on No. 13, the putter stayed hot as Feld drained a 35-footer after a pin-high approach.

After his drive on the par-5 16th landed in the right rough, he laid up and hit the green with his third shot, then snaked in another birdie to move to 3-under on the morning. Feld then made the turn and had a string of five straight pars before making his fourth birdie of the day on no. 4, aided by an excellent approach from 160 yards with an 8-iron to the front of the green.

The only mistake of the day came on the par-3 242-yard 8th hole, where Feld missed a short par putt and settled for a bogey, moving him back to 3-under par. But facing his first bit of adversity on the round, he battled back and reclaimed that shot with a closing birdie on No. 9. There, he hit his tee shot into the right rough, laid up and hit his approach about 15 feet above the hole, sinking the putt to close his round with a flourish.

“The course was pure today. It was absolutely perfect,” said Feld, who coaches the Drexel University golf team. “I’m glad to post the round I did and now I have to come back tomorrow and try to do it again.”

Feld noted that the wind picked up toward the end of his round, figuring it would play a role in the afternoon portion of the championship, and he was right. Menon cited the wind as playing a part in his fairly conservative play en route to his 4-under par round.

“I played pretty solid today and managed to keep the ball in the fairway and to hit greens regularly,” Menon said. “With the wind picking up, you want to kind of manage your misses and make sure you’re in the right spot around here.”

Menon’s round was bogey-free, and he credited his strategy with putting him in good positions to score well.

“Pars out here aren’t going to kill you,” said Menon, of Wyomissing, Pa. “I had a lot of 20 to 25 footers for birdie, but I think my longest par putt of the day was from four feet on No. 7. With the wind the way it was, that definitely played into my approach of being a little more conservative today.”

Menon’s round continued a string of strong play in the area this summer, as he qualified last week for the upcoming U.S. Amateur by shooting 8-under over 36 holes at Bidermann Golf Club.

Finishing the day at 3-under par 69 were Whitemarsh Valley Country Club’s Will Davenport, Zachary Juhasz of Northampton Country Club and PAGA Individual Member Kyle Vance. Vance was in position to tie or best Feld’s score before a closing double bogey on the 18th.

“I’m right in the middle of things so I’ll take that,” said Vance, who plays golf at Kansas State University.

Vance hit his first 13 greens in regulation and only missed two greens on the day. Even after making bogey on No. 14, he bounced back with birdies on the par-5 16th and the par-3 17th, the latter from about a foot away. But after the double on No. 18, he was back at 3-under par for the round, still firmly in contention.

“I had the putter rolling pretty good today,” Juhasz said.

Davenport, who won the Golf Association of Philadelphia’s Middle-Amateur championship in May, had three birdies with no bogeys to shoot 67.

Aronimink’s own Max Siegfried, who won the club championship on Sunday, fired a 2-under par 68 to lead a group of golfers tied in sixth place at that number.

This is the fourth time that the championship has been conducted at Aronimink, but the first since Steve Kovach won in 1941. The event was also held at Aronimink in 1931 and 1935.

The championship continues with Tuesday’s second round at Aronimink, and the field will be cut to the low 40 and ties for Wednesday’s final round.