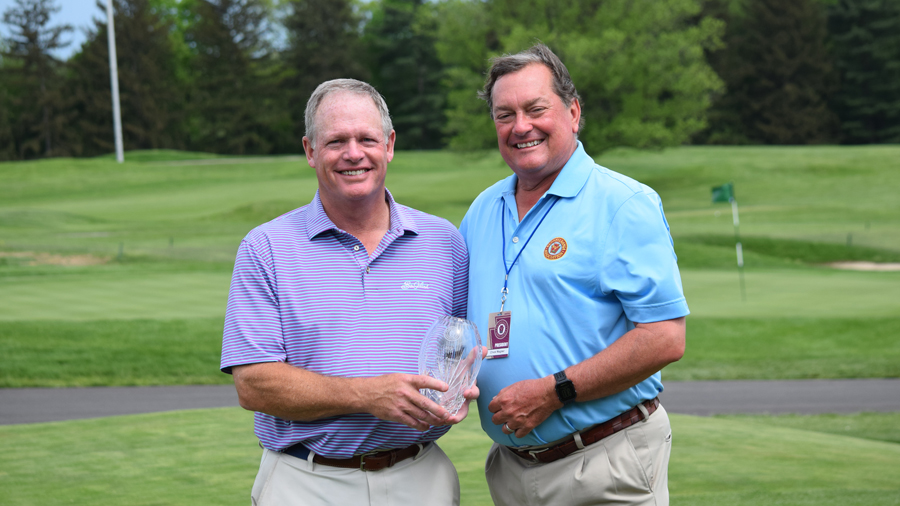 SEWICKLEY, Pa. - Lehigh Country Club's Bob Beck knew he would have his hands full when he began the championship match of the 13th Pennsylvania Senior Match Play presented by LECOM. When facing a golfer with the accomplishments of Sean Knapp, you need as many breaks to go your way on a given day to knock off a champion like Knapp. And Thursday proved to be that day, as Beck played brilliantly throughout the day to top Knapp, 2 up, and win the championship at Allegheny Country Club.

"It was very unexpected," Beck said of his victory. "I just tried to make a few putts today. I got a lot of breaks to go my way."

Beck fell behind early as Knapp birdied the first hole. Facing a possible two hole deficit after Knapp made birdie on the second, Beck stepped up and made a birdie of his own to halve the hole. He then won the third, fifth and sixth holes to move 2-up. Knapp came back with a birdie on the 7th to move to within one. Then on the par-3 8th, Beck's tee shot was just off the green and he was looking at a tough shot over the slope to the pin. As he said, the golf gods were on his side today, as the putt meandered over the slope and into the hole for the birdie to put the lead back at two holes.

"Yeah, that one was luck," Beck said. "I was just trying to get it close there."

The two competitors split the next two holes, with Knapp taking the ninth but Beck coming back with a par to win the 10th. Knapp once again closed the gap with a birdie on 14, putting the former U.S. Senior Amateur champ just one hole back with four to go.

One hole later, the match was all square, as Beck three-putted the 15th. After both men made 5 on the 16th, the match moved to the final two holes.

On 17, both golfers hit it down the middle off the tee. The approach shots for each player resulted in a pair of downhill putts with the match still all square. Beck's putt ended up about five feet short, while Knapp's ended up a little over two feet past the hole. Beck came back and sank the par putt, and after Knapp's putt just missed, Beck headed to the 18th with a 1-up lead.

The 18th hole saw each golfer with a fine drive, and Knapp's approach shot ended up safely on the green about 20 feet away. With the preessure on, Beck hit a wedge to five feet. Knapp, knowing he needed to make the putt to have a chance to extend the match, made an aggressive attempt that barely missed, and with that, he conceded Beck's birdie putt, giving Beck the 2-up victory.

"The golf course was great and I'm thrilled to win this event," Beck said. 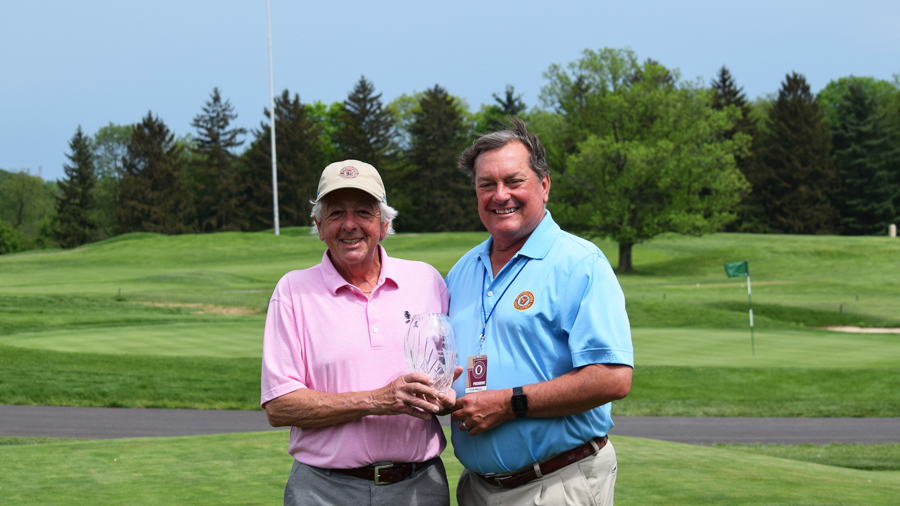 The 2019 season is starting on a familiar note for White Manor Country Club's Don Donatoni. The defending champion and super-senior stalwart held off a challenge from Paul Schlachter to capture the Super-Senior Match Play title.

Donatoni showed some stamina in being able to advance to day two after an opening round match against Thomas Humphrey that took 23 holes.  In the final on Thursday afternoon, he came away with a 2-up victory over Paul Schlachter.

"I mustered up just enough energy to win that match," Donatoni said.

Knowing he was facing one of the few super-seniors in the commonwealth with a resume to match him, Donatoni was ready for the challenge.

"Paul is a tremendous person and a great talent," Donatoni said. "Match play is so unpredictable, and you just have to take it one shot at a time. It's just so wonderful to win and to be able to defend after winning last year."

After the pair halved their first three holes, Donatoni moved ahead by winning both the fourth and the fifth holes. Schlachter took the sixth to get back to just one down, and after both men made par on No. 7, the turning point in the match came on the par-3 eighth hole.

Schlachter hit an outstanding tee shot to gimme range to put the pressure on Donatoni. Knowing he needed to make his putt to keep his lead, Donatoni came up with the clutch putt at the perfect time.

"I stood over mine and knew I had to get it to the hole," said Donatoni. "Fortunately, I drilled it right in the middle."

Through 11 holes, Donatoni was 5-under par, with a lot of the credit going to the putter.

"There was something magical about that club today," Donatoni said. "I only missed one putt that I really should have made."

Despite the hot putter, the outcome was still in doubt as the duo headed to the 16th with Donatoni clinging to a 1-up lead. His second shot was on the side of the bank by the green with a difficult lie. A great chip at the right moment came next, as he nearly made it and tapped in for par to win the hole.

Schlachter wasn't done yet, though. Needing to win the final two holes to force extra holes, he won the 17th with a par after Donatoni couldn't convert his par putt. They moved to the 18th, where both players were above the hole after their approaches, though Donatoni was nearly 50 feet away. A great lag putt ended up just three feet away, forcing Schlachter to have to make his birdie to extend the match. That putt didn't fall, and Donatoni's par was conceded, giving him the 2-up victory. 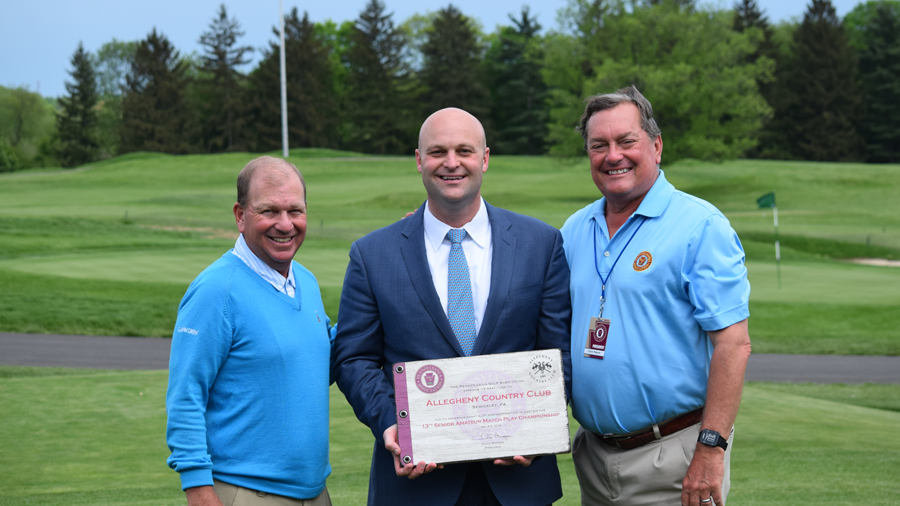 The Pennsylvania Golf Association would like to thank the staff and membership of Allegheny Country Club for their hospitality during the event. Thanks as well to LECOM for the sponsorship of the championship.