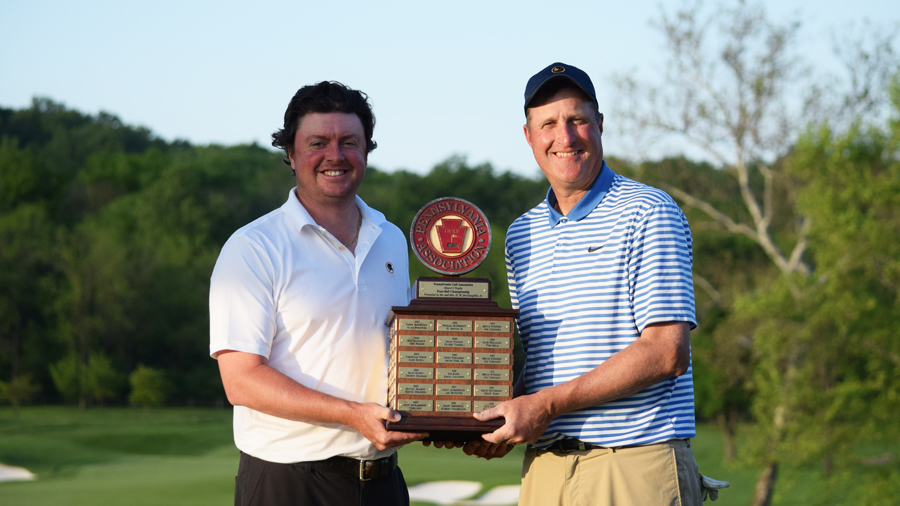 Nathan Smith and Sean Knapp pose with The Mayor's Trophy

PLYMOUTH MEETING, Pa. - There are few, if any, amateur golfers with better resumés in the Pennsylvania Golf Association than Sean Knapp and Nathan Smith. Between them, they've captured 23 PAGA championships. But neither man had been a part of a winning team in the Pennsylvania Four-Ball, though Knapp was a runner-up in the inaugural event in 1990. That all changed on Thursday as Knapp and Smith shot a 9-under par 63 for the second day in a row to win the championship at Philadelphia Cricket Club's Militia Hill course. The two-round total of 126 set a record for best 36-hole winning score in the 30-year history of the championship, which is presented by LECOM.

"Definitely not," Smith said when asked if he had considered the possibility of shooting 9-under par on consecutive days. "But Sean made it all possible. He was incredible this week. It was the best I've ever seen him play."

The pair, close friends from the western side of the Commonwealth, are each past USGA champions and they know how to close out events. That experience was key on Thursday as they held off a charge from two golfers from the host club, Conrad Von Borsig (2009 Philadelphia Amateur Champion) and Matt Kocent, who finished two shots back at 128 (-16) with consecutive rounds of 64.

"He's my best buddy and I'm just honored to win," said Knapp of Smith. "And if you want to know why someone has won so many USGA Mid-Ams, just look at what he did coming down the stretch today."

The area finally saw a respite after weeks of rain with two beautiful sunny days for the championship, though the winds were gusting around 20 miles per hour each day. Smith, of Wildwood Golf Club, and Knapp, of Hannastown Golf Club, had a one-shot leading coming into the second round, and they were challenged early by Von Borsig and Kocent. After six holes in the second round, Von Borsig and Kocent were 3-under on the day compared to 2-under for Smith and Knapp, meaning the teams were tied atop the leaderboard at 11-under par for the championship. That brought up the 7th hole, which was a critical juncture in the event according to Knapp.

Smith was just off the green over 50 feet away, while their opponents were on the green with a good look at par. But in one of the signature moments of the championship, Smith jarred it for birdie while Von Borsig and Kocent couldn't convert pars, creating a two-shot swing.

"That hole was playing brutal," Knapp said. "That was definitely a turning point for us."

The back nine was more of the same, with birdies by both teams in the final pairing. With three holes left to play, Knapp and Smith led by three strokes. Again, Smith's championship experience came up huge. He hit it to four feet on No. 16 and converted the birdie to match Kocent on the hole. And then on No. 17, Von Borsig hit a second shot 3-wood to 15 feet to set up an eagle opportunity.

"He hit the best 3-wood I've ever seen anybody hit," Smith said. "You just knew he was going to make the eagle."

Smith proved prophetic, as Von Borsig rolled in the eagle. Smith was facing seven feet for a birdie, and he calmly stepped up and rolled it in the hole to limit the damage on the leaderboard.

"With 10 years of playing with somebody and his history and his game, it can be difficult at times but can also be easy because you know you always have somebody behind you," Knapp said.

On the 18th hole, with a two-shot lead, Smith again led the way, safely reaching the green about 30 feet away from the hole, where he lagged to just a couple of feet and made the par putt to clinch the title. Both players on the winning duo cited the tough competition as actually a key to their success.

"Conrad and Matt were off the charts today," Smith said. "We really worked hard to try to keep that two or three shot buffer all day."

"We got lucky in a sense that Conrad and Matt played so well because they pushed us to a level that we might not otherwise have gotten to," he said.

Von Borsig and Kocent weren't the only golfers to make a run at the eventual champions down the stretch. Jericho National Golf Club's Lukas Clark and Hickory Heights Golf Club's Louis Olsakovsky followed up a 65 on Wednesday with a 64 in round two, finishing in third place at 129 (-15).

The Pennsylvania Golf Association would like to thank the staff and membership of the Philadelphia Cricket Club for their hospitality during the championship. Thanks as well to LECOM for the sponsorship of the event.