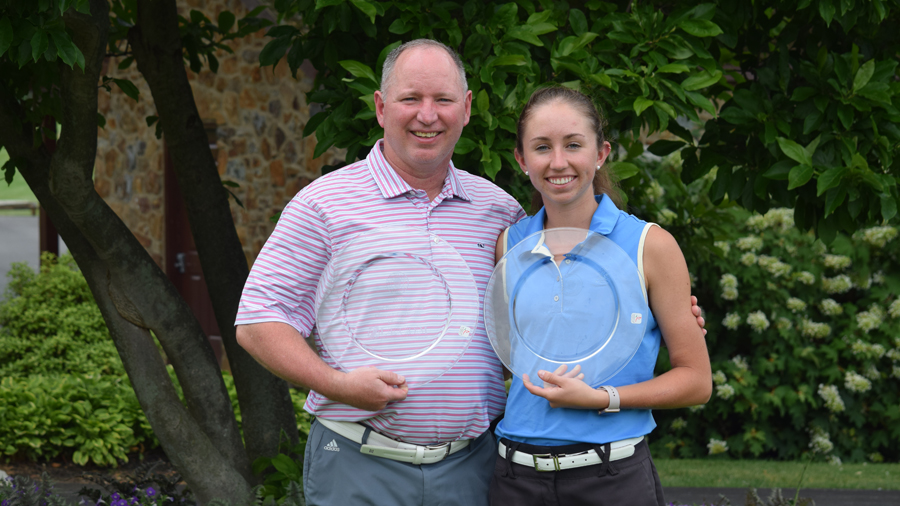 YORK, Pa. - Good things come to those who wait. And for Carlisle Country Club's Jeff Frazier, it had been a long wait, as he has played in over 25 Pennsylvania Golf Association championships but had not finished first in any of them. But he had the secret ingredient this time - his daughter, Morgan. The rising senior at the Naval Academy teamed with her father to score 41 Stableford points in round two on Tuesday, and 78 points in total, at the Country Club of York.  After finishing tied with home club representatives Todd and Amy Kennedy, the Fraziers won with par on the first playoff hole to claim the championship gross division of the inaugural Mixed Team Championship, presented by LECOM.

"Morgan played phenomenal today," said the proud father. "She made a lot of putts and had some great drives, too."

The duo needed it, as they began the day trailing Robert Olseski, III and Muffy McCabe by two Stableford points. But five birdies on the front nine proved to be the key to the winning formula. That included a clutch 25-footer down the hill on the par-3 sixth hole, which both players cited as a key in today's round.

The pair didn't have much experience on the venerable Donald Ross layout, as Jeff had played just once and Morgan not at all prior to Monday's opening round. But they used that round as a way to learn about the course and set up their charge on Day 2. They started quickly in the Chapman format, which sees both players hit their tee shots, then hit their teammate's ball for shot two, and then select the ball to play for the third shot and alternate shots the rest of the way until the ball is holed.

Showing the local knowledge they picked up on Monday, the Fraziers birdied each of the first two holes after making a pair of pars on those holes in the opening round. The next red number came on the aforementioned sixth hole, and it was key as the pair made their only bogey of the round on the following hole. But back to back birdies on No. 8 and No. 9 gave them the momentum they needed for the final nine holes.

On the back side, it was all pars with the exception of No. 15, but the blistering start on the front was what they needed to hold off a charge from Amy Kennedy and Todd Kennedy, who were playing out of the host course.

For Jeff, it was a well-deserved victory after a lot of attemps in past PAGA championships, and with an added bonus.

"It's even more awesome to win this with your daughter," Jeff said.

In the Forward division of the Gross competition, Carlisle's Daniel Boreman and Mckylie Boreman carded 68 Stableford points to eek out a one-point victory over the team of John Pagana and Barbara Pagan of Huntsville Golf Club.

The Net Forward division also went to the Boremans with 90 Stableford points, with Barbara Naglak and Andy Naglak of Moselem Springs coming in second place at 88 points.

The Pennsylvania Golf Association would like to thank the staff and membership of Country Club of York for the hospitality this week. Also, thanks to LECOM for their sponsorship of the inaugural Mixed Team Championship.