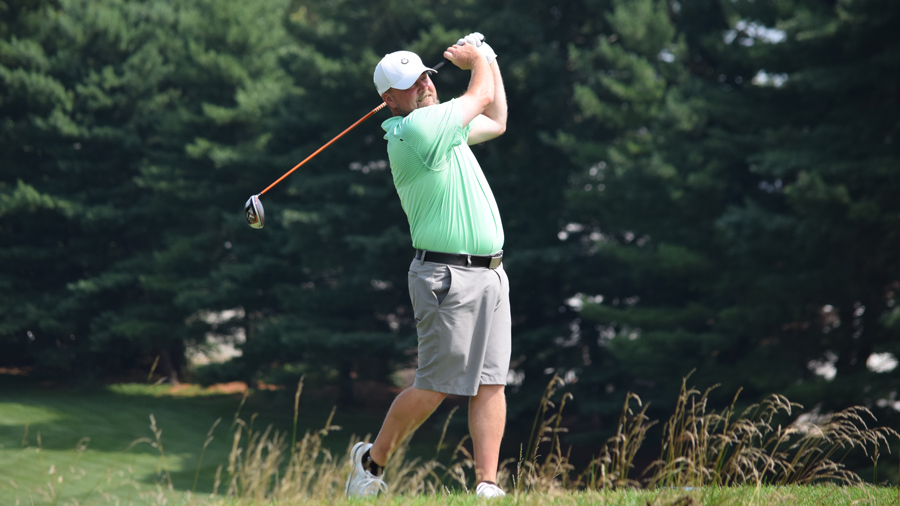 HAVERTOWN, Pa. – Louis Olsakovsky and Eric Williams were among the last players to advance through stroke play qualifying Monday at the 16th R. Jay Sigel Amateur Match Play championship at Llanerch Country Club. But they proved Tuesday that the seeds don’t matter when you get to match play, as each player knocked off a pair of higher seeds to advance to the semifinals on Wednesday morning. Also joining them in the semifinals are Tug Maude and Sean Semenetz, who each notched a pair of impressive wins to advance in the championship, which is presented by LECOM.

Olsakovsky, a 19-year old who plays golf at Penn State, knocked off medalist Michael O’Brien, 4 and 2, in the morning’s Round of 16 opening match before beating six-time event champion (and two-time defending champion) Nathan Smith, 2 and 1, in the afternoon.

“I was just trying to play really patient today,” said Olsakovsky, who plays out of Hickory Heights Golf Club. “The course is gettable if you’re able to hit fairways and greens but it’s very tricky in some spots. There are some holes I had to play more conservatively than others, but it worked out for me today.”

In the match against O’Brien, a standout golfer at St. Joseph’s University, Olsakovsky never trailed. While O’Brien railled to get the match back to all square on a couple of occasions, Olsakovsky took the lead on No. 12 and never looked back. He closed in style, with a birdie barrage on holes 14, 15 and 16 to close out the match. That included driving the green and nearly making eagle on the 15th and reaching the green from the fairway bunker on No. 16, then converting the birdie putt.

“I really just played solid and didn’t make too many mistakes,” Olsakovsky said. “I was able to get a lead early and was just hitting fairways and keeping the pressure on him.”

After taking down the medalist, Olsakovsky then had to face Smith, of Pinecrest Country Club, a multiple-time USGA champion and one of the most decorated match play amateur golfers in the country. Smith reached the quarterfinals after jumping out to a quick lead and dispatching of Anthony DeGol, 6 and 4. Smith won four of the first five holes and never looked back. He closed the match out with a par on No. 14.

When Smith won the opening hole with a par against Olsakovsky, it looked like the three-peat was a possibility. But Olsakovsky fought back to even the match with a par on No. 3 and the two golfers traded wins back and forth in the match that saw nine lead changes. Heading into No. 14, they were tied, but Olsakovsky captured that hole to retake the lead. His lead was still one shot heading into the uphill par-3 17th.  With his tee shot on the front of the green, he was in a tough spot with the back left hole location. He originally thought he would have to putt his ball off the side of the green and back on, but eventually decided to play it through the fringe.

“I just tried to get the right speed, and once it started getting up over the hill, it looked like it might go in,” Olsakovsky said.

The putt did go in, and with the incredible birdie came a 2 and 1 win over the stalwart Smith.

Williams, of Honesdale Golf Club, took the longest route to the semifinals, with 36 holes of stroke play qualifying yesterday followed by a four-hole playoff to reach match play, and then a 2 and 1 victory over Mark Goetz of Hannastown Golf Club in the morning and then a 26-hole marathon win over Zachary Barbin of Loch Nairn Golf Club that began early in the afternoon and ended early in the evening.

Against Goetz, who had the low single round in qualifying with a 64 on Monday, Williams won the opening hole but dropped three holes in a four hole stretch to fall two down after six. He scrapped back to even the match with a birdie on the par-3 12th, and won three of the final four holes from there, closing Goetz out with a par on No. 17.

“My big two holes in that match were birdies on No. 11 and No. 12,” Williams stated. “Those got me back in the match and I was able to keep it going.”

That put Williams against Barbin, who knocked off Bala Golf Club’s Wills Montgomery, 4 and 2, in the Round of 16. Williams took an early lead with pars on the first two holes to win each, but then lost three consecutive holes starting on No. 6. But Barbin found the trees on No. 9 off the tee and then hit his tee shot out of bounds on No. 10, enabling Williams to even the match. Another win on No. 11 gave Williams a 1-up lead. Heading into the 16th hole, the margin was still one in favor of Williams. But Barbin hit a 3-wood on the green from 275 yards out to make birdie on the par-5 and square the match.

On the 17th, Barbin’s tee ball found the bunker and after a splash out over the green and a chip short, he conceded the hole as Williams had it in close for birdie. Down heading into the 18th, Barbin drove the green on the 296-yard par 4 to about 20 feet. Williams, meanwhile, hit his layup tee shot behind a tree and punched out into a greenside bunker. His third shot landed in the rough, but he wasn’t out of it yet, as he chipped in for par to force Barbin’s hand.  Barbin was ready for the challenge, two-putting for birdie to force extra holes.

That’s when the fun started. After Williams got up and down from 50 yards to save par on No. 1, the players exchanged routine pars on the next four holes. On the sixth hole, Williams missed a five-footer for birdie that would’ve won the match. Barbin then hit a great approach on the 393-yard seventh hole, but missed the birdie before making a comebacker for par to extend it. On the par-3 eighth, though, Barbin found the water off the tee to the right. Williams hit the green, about 40 feet from the hole, and after Barbin missed a putt for 4, he conceded the hole and the match.

Maude, of Merion Golf Club, topped Old York Road Country Club’s John Samaha in the morning match. Despite a 5-down deficit through 10 holes, Samaha didn’t give up, rallying to win five straight holes and tie the match up. But Maude promptly won the next two holes and the match, closing it out with a par on the 17th to win, 2 and 1. He advanced to the quarterfinals to face Rick Stimmel of Diamond Run Golf Club. Stimmel outlasted Llanerch’s own John Lalley, 2 and 1, on Tuesday morning. Stimmel fell behind early but after taking a lead on the sixth hole, he never looked back.

In the quarterfinals, Stimmel and Maude traded wins on the opening six holes. Maude then won No. 7 and No. 10 to pull ahead, and a birdie on the par-3 12th pushed the lead to 3-up. He eventually closed out the match on No. 15, winning 4 and 3 to move on to the semifinals.

The final semifinalist, Sean Semenetz of Philadelphia Cricket Club, had a hard-fought 2 and 1 win over Whitemarsh Valley Country Club’s Will Davenport in the morning match. Davenport won the opening two holes but Semenetz had evened the match just three holes later and won five of the final six holes on the front side to take a 3-up lead at the turn. A birdie by Davenport on No. 15 got the deficit down to just one, but Semenetz came back to win the 16th and then closed out the match on No. 17.

Semenetz moved on to face Dawson Anders of Indian Valley Country Club, who edged Green Valley Country Club’s Ben Feld, 2 and 1, in the Round of 16. That close match saw no player with a lead of more than one hole until Anders won the final three holes, including a birdie on No. 17, to finish off Feld.

In the quarterfinal match, Semenetz and Anders traded wins early but Semenetz won the ninth hole with a par 4 and took a 2-up lead at the halfway point. Anders rallied with back to back birdies on No. 10 and No. 11 to even things up. But just as quickly, Semenetz moved back ahead with wins with a par on the 12th and a birdie on the 13th hole. From there, the players halved the remaining holes, enabling Semenetz to win the match with offsetting pars on No. 17.

The semifinals begin on Wednesday morning with Olsakovsky taking on Maude at 8 a.m. and followed by Williams against Semenetz at 8:10 a.m.