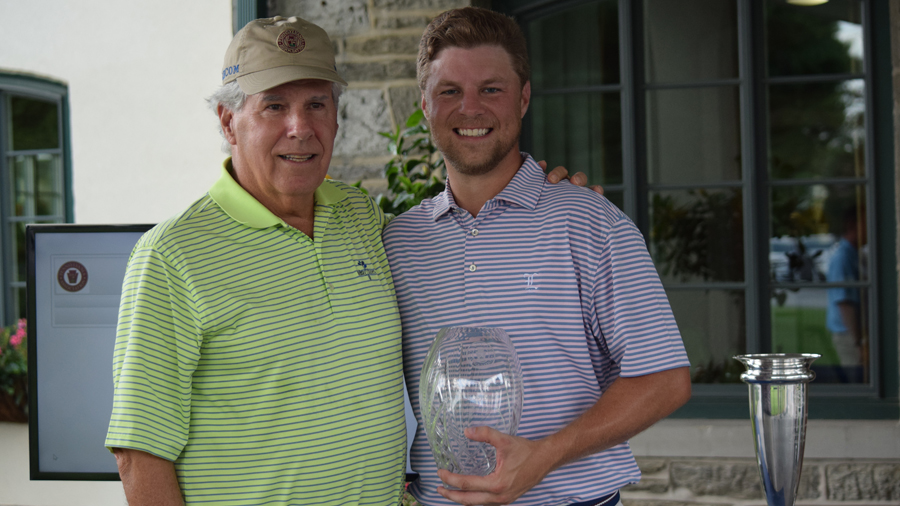 HAVERTOWN, Pa. – Leading up to the 16th R. Jay Sigel Amateur Match Play Championship, Sean Semenetz didn’t spend his days on the golf course practicing for the event. Instead, he was in Ocean City, N.J., relaxing on a vacation over the long holiday weekend with his girlfriend. A few days of relaxation was apparently exactly what he needed, as Semenetz played outstanding golf over the event’s three days, culminating in a 2 and 1 win over Louis Olsakovsky in Wednesday afternoon’s final match at Llanerch Country Club in the championship, which is presented by LECOM.

“I had not picked up a golf club in a week before coming here Monday morning,” said Semenetz, of the Philadelphia Cricket Club. “My expectations were at an all-time low. But I guess it worked out for me.”

Semenetz took out Honesdale Golf Club’s Eric Williams in the morning semifinal, 7 and 5, to advance to face Olsakovsky, who defeated Merion Golf Club’s Tug Maude, 4 and 3.

The final match saw Olsakovsky take an early lead with a nice left to right birdie putt on the par-4 second hole. Semenetz evened things up with a winning par on No. 4, but Olsakovsky won two of the next three holes, including a birdie on No. 7 after he drove it in the right rough and had to hit his approach 80 yards and over a tree, but the shot was perfect and he drained the ensuing six-foot putt.

Semenetz rallied to win the par-3 eighth hole after Olsakovsky missed the green left off the tee and couldn’t convert his par putt. But after another Olsakovsky win on the 11th hole, the lead was two with just seven holes remaining. That’s when Semenetz stepped up his game, winning four of the next five holes to clinch his first Pennsylvania Golf Association championship.

It started with a win on No. 12 to get within one, and then after Olsakovsky hit his drive on 14 in the rough, Semenetz got up and down for par to square the match.

On 15, Semenetz hit a great approach to two feet and made birdie, giving him his first lead of the final.

“That was a key shot for me today,” noted Semenetz of the approach on the 15th. “That was the shot I needed at that time.”

On the par-5 16th, Semenetz reached the green in two while Olsakovsky was in the right rough. But Olsakovsky hit an outstanding flop shot to about eight feet, and Semenetz’s third shot still left about 10 feet remaining for birdie.

But Semenetz stepped up and drained the birdie putt, and after Olsakovsky just missed on the outer edge, the lead was two with just two to play.

“That was the only real fist pump I gave out there today,” Semenetz said after the birdie putt on 16.

The players headed to the uphill par-3 17th hole. For Semenetz, who has played Llanerch CC countless times in his life, it was a fitting hole to end the championship.

“The 17th is a Llanerch hole,” Semenetz said. “That’s the best way to describe it. It’s a distinct Llanerch hole.”

With the momentum on his side, Semenetz just wanted to hit the green and leave himself with a safe look at birdie. He stepped up on the 155-yard hole and knocked his iron to about seven feet away, putting the pressure on Olsakovsky. The Penn State University golfer spun an iron to the front edge. Knowing he needed to make birdie to have a chance to extend the match, Olsakovsky’s putt was on the right line but stopped just short. Semenetz then lagged his birdie putt down to the hole and par was conceded, giving the trophy to the 32-year old Philadelphia resident.

“This is the biggest event I’ve ever won,” said Semenetz, who was playing in the championship for the first time. “I’ve played in some USGA events and I’ve won some smaller events, but this is the biggest one.” 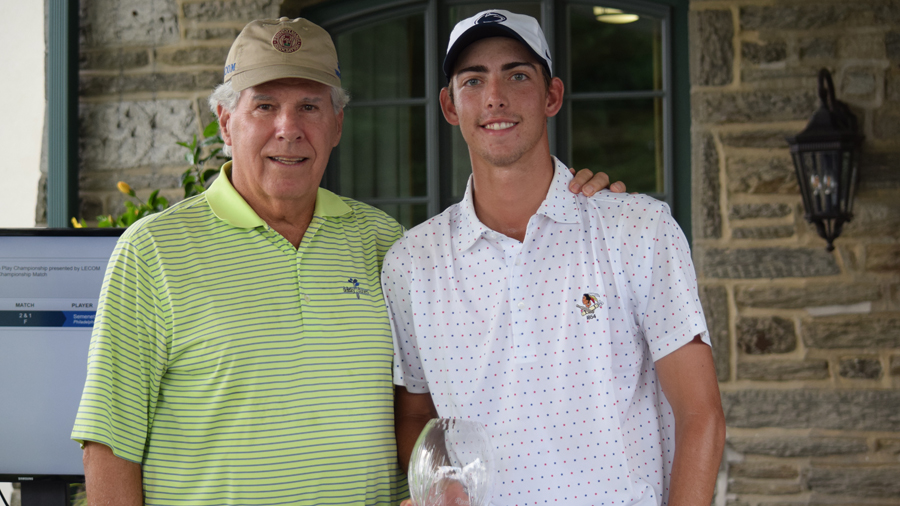 For Olsakovsky, it was a tough way to end a fantastic week. From being the last player to qualify for match play to advancing past the stroke play medalist (Michael O’Brien) and one of the most decorated golfers in state history (Nathan Smith) en route to the final of a state championship, it was quite the week for the Hickory Heights Golf Club standout.

“It was a good week. I am really happy with the way I played,” Olsakovsky said. “I was struggling earlier this summer so it’s nice to see my game come around a little bit.”

Both players were extremely complimentary of the staff of Llanerch for the condition of the golf course.

“This course changed so much over the last few days,” Olsakovsky said. “It was almost like a different golf course every time you played it, but it was in fantastic shape. The way that they kept the course all week was perfect.”

Semenetz said that Monday’s rainy conditions took away the local advantage for players familiar with the course, but that today’s rounds were more like the Llanerch he was used to playing.

“They did such an awesome job with the course this week,” said Semenetz, who actually worked in the bag room at Llanerch for a couple of months after graduating college in 2009.

The Pennsylvania Golf Association would like to thank the staff and membership of Llanerch CC for the hospitality extended during the championship. Thanks as well to LECOM for the support and sponsorship of the event.