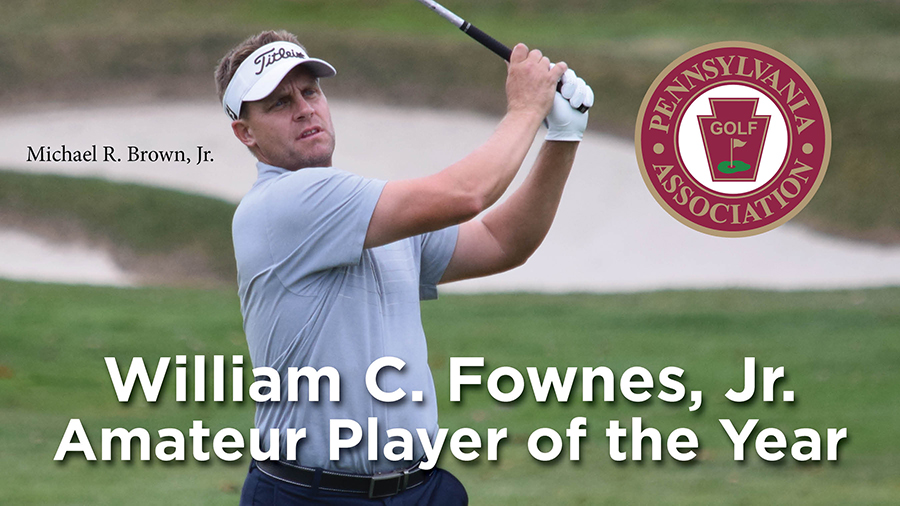 BROOMALL, Pa. – Consistency was key as LuLu Country Club's Michael R. Brown, Jr. won his first Pennsylvania Golf Association William C. Fownes, Jr. Amateur Player of the Year Award.  Brown tallied 552.5 points across seven different events, capped off with a season-ending win at the 15th Art Wall, Jr. Memorial Championship presented by LECOM at the Country Club of Scranton.  Sean Semenetz of the Philadelphia Cricket Club used his victory at the 16th R. Jay Sigel Match Play Championship presented by LECOM to propel himself to a runner-up finish in the Player of the Year standings.

Brown isn’t a stranger to postseason accolades, having won the Golf Association of Philadelphia’s William Hyndman III Player of the Year Award in 2010 and 2018, respectively.

“I’m honored to join a list of great players in Pennsylvania who have won this award before me.  I’ve competed in Pennsylvania my whole life and I look up to many of them.  Player of the Year wasn’t really on my radar until later in the season,“ said Brown.  “Connor Schmidt and Sean Semenetz were guys I was keeping tabs on, especially Sean since he was in contention at the PA Mid-Am at Longue Vue and made it real close in the end.  Connor and I had a battle at the Dressler at Union League at Torresdale to start off the year that I’ll never forget.  He did what winners do.  These are the kind of guys that push me to be better.  Pennsylvania golf is so strong, and to be on the top of the points list at the end made it a great year.”

A graduate of Cheltenham High School and a four-year letter winner at Indiana University of Pennsylvania, Brown is a reinstated amateur as of 2008 after a stint playing professionally for nearly 10 years.  He can regularly be found after his round at the practice range or on the putting green until dusk.

“I don’t love to practice, but I do love to compete and it’s an all or nothing thing for me,” said Brown.  “I feel the only way for me to have a chance to win is to be all-in, so I do my best to be prepared.  I’m fortunate to be healthy enough and have great coaches in Scott Yurgalevicz and Mike Dynda helping me do what I love most.  They know I’m stubborn, but I do believe what they tell me.”

Brown added, “I look forward to playing great setups on courses that the Association and its Member Clubs give us every year.  The PAGA has been so instrumental in producing great players in Pennsylvania.  I speak on behalf of the players that we truly appreciate the staff, officials and dedicated volunteers that make every event special and provide great competition.”

The William C. Fownes, Jr. Amateur Player of the Year Award is given to the player who exemplifies the highest standards of excellence on the golf course in skill, sportsmanship, and etiquette in the Commonwealth of Pennsylvania.