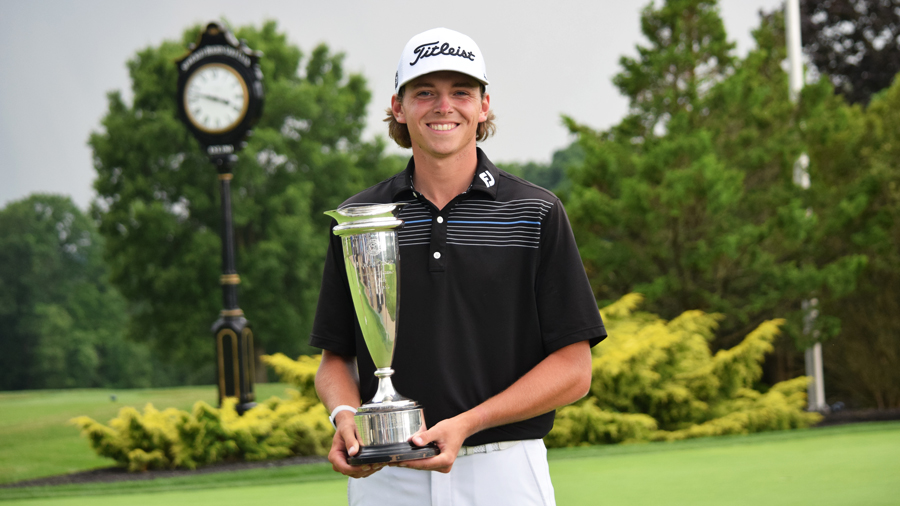 SEWICKLEY, Pa. - Out of the hundreds of thousands of golfers in the commonwealth of Pennsylvania, the 18th R. Jay Sigel Match Play Championship came down to a pair of young standouts who each just finished their second year of college. And at the end of Thursday’s matches, one rose to the top, as Hannastown Golf Club’s Palmer Jackson outlasted Talamore Country Club’s Patrick Sheehan to win the championship, presented by DICK’S Sporting Goods. Jackson outlasted a great effort by Sheehan to win the final, 2 and 1, at Sewickley Heights Golf Club.

“Patrick’s a great player,” said Jackson, who plays on the golf team at Notre Dame. “I played with him in the state championships in high school and I knew he was going to be a great player. I’m fortunate to have had enough to win today.”

Both players certainly earned their spots in the final, as Sheehan topped Mark Goetz of Hannastown GC and West Virginia University, 3 and 1, while Jackson outlasted six-time Sigel champ Nathan Smith, 2 and 1, in the other semifinal.

“I played against Nathan in the US Four-Ball two weeks ago and my team beat his so I knew he would come out firing,” said Jackson. “But I found a way to get the ball in the hole and to take him out was really cool.”

Sheehan, meanwhile, wasn’t playing with his regular set of clubs after his were stolen recently and to add to that, he broke his driver in the match against Goetz and had to borrow one from the pro shop for the championship match.

Jackson jumped out to an early lead in the final after Sheehan was unable to convert a 6-footer for par. But from the same distance on No. 3, he rolled in a birdie putt to square the match. The 5th hole (par 4, 328 yards) saw Sheehan drive the green, but he three-putted for par and Jackson was able to halve the hole. Jackson followed that with a birdie on the par-5 6th hole to move back ahead. But Sheehan came right back with a nice birdie on the 7th, a 179-yard par 3, to even the match yet again.

The next three holes ended up being the deciding ones in the round, as Jackson won all of them to move 3 up. FIrst, on the ninth, Jackson hit a good approach to four feet and sank the putt after Sheehan couldn’t convert his birdie try. Then on No. 10, he sank another birdie to move to 2 up. He kept it up with yet another birdie on the 11th to take command of the match.

Jackson, the 2017 Pennsylvania Junior Champion, was poised for his second state title but Sheehan wasn’t ready to give up. The Penn State Nittany Lion golfer got one back when Jackson found the greenside bunker on 13. But Jackson extended the lead back to 3 with a win on the 15th, where he made par to move to dormie with three to play.

That’s when things got interesting. Needing a birdie to extend the match on No. 16, Sheehan knocked in a 25-footer on the 213-yard par 3.

“I figured I kind of had to make it,” Sheehan said. “It was a pretty tough putt and I just tried to force it to the next hole.”

The match moved to the 17th hole, and with some bad weather on the horizon, the final result was anything but certain. On the 603-yard par 5, each player found the green and had a birdie putt. Sheehan went first, from about 10 feet, and again he put the pressure on Jackson by finding the bottom of the cup for another birdie. Desperate to avoid having to go to the 18th, Jackson came through, matching the birdie to halve the hole and win the match and the championship.

“I’ve got to give him a ton of credit for how he fought on the last two holes,” Jackson said. “And he forced me to make mine to win at the end. As a competitor, that’s how you want the match to end.”

The timing was ideal, too, as storms moved through about 20 minutes later that would’ve halted play if the golfers had still been on the course.

Sheehan, who shot 64-69 (-11) to earn medalist honors in the stroke play qualifying, was happy with his showing.

“It was a really good three days,” said Sheehan. “Yeah I lost in the finals, but I can’t be disappointed about this week.”

The Pennsylvania Golf Association would like to thank the staff and membership of Sewickley Heights Golf Club for the hospitality shown this week. Thanks as well to DICK’S Sporting Goods for sponsorship of the championship.