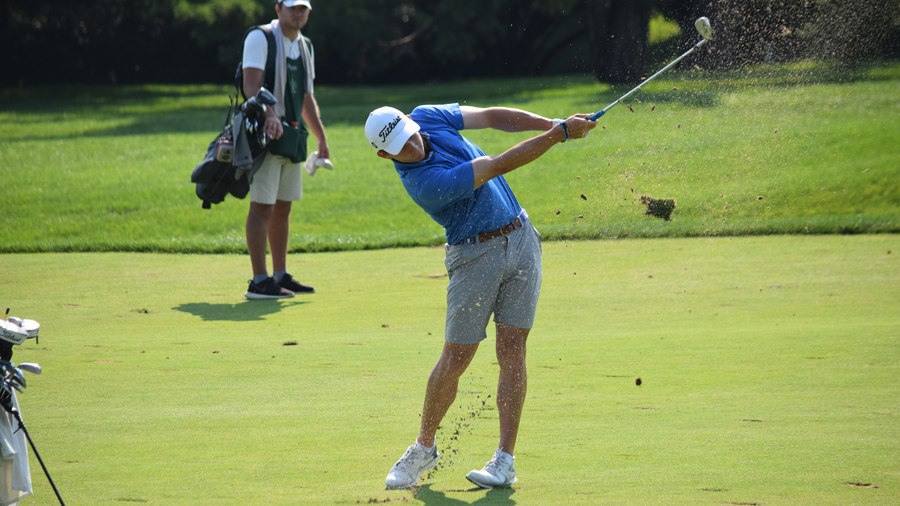 Broomall, Pa - For the second straight year, the Pennsylvania Golf Association’s W.C. Fownes, Jr. Amateur Player of the Year award was decided by less than 10 points in the standings, with Carlisle Country Club’s John Peters edging out Diamond Run Golf Club’s Rick Stimmel by 6.6 points to win the honor.

For Peters, a Duke University standout, it’s his first time winning the award and comes a year after he captured the Pennsylvania Amateur championship with a legendary walk-off eagle on the 18th hole at Merion Golf Club. He earned 494.1 points from three events (Pennsylvania Amateur, R. Jay Sigel Match Play, Pennsylvania Open) to take the honors and fulfill a goal he set at the beginning of the summer.

“I was striving for consistent play this summer,” said the 20-year old standout. “I missed the cut at the Pennsylvania Open and the Match Play last summer and I really wanted to win the Player of the Year.”

He began his summer with a run to the semifinals at the Sigel Match Play at Huntingdon Valley Country Club. Then, trying to defend his State Am title at Llanerch Country Club, Peters came up short but still finished in a tie for fourth place, earning 217.5 points. Then, playing his third PAGA event in six weeks, Peters closed strong in the final round of the 106th Pennsylvania Open, shooting 69 at Longue Vue Club to finish tied for 16th, earning an additional 126.6 points.

However, Peters had to hold on as Stimmel, the 2020 Player of the Year, made a run up the point standings. Stimmel was slightly over 165 points behind Peters entering the Art Wall, Jr. Memorial Championship in September. He won that event at West Shore Country Club, earning 100 points. He needed a top 10 finish at the Middle-Amateur Championship at the Country Club of Scranton the following week to topple Peters. However, he came in 13th place at Scranton to clinch the award for Peters.

“The Pennsylvania Golf Association means a lot to me,” said Peters. “PAGA has helped me get to where I’m at today at Duke University and I’m really humbled to be a part of the legacy of the association.”

The Senior Player of the Year went to a familiar name, as Sean Knapp of Hannastown Golf Club captured the prize for the sixth straight year.

“There were no specific highlights this year,” said Knapp. “I’m just happy to be consistent. I wish I would’ve won more events but if you play well in every event, the Player of the Year takes care of itself.”

For Knapp, whose career has seen him win nearly every PAGA individual men’s championship as well as three Amateur Player of the Year awards, each year he can compete brings him additional joy.

“It feels really good to be able to play at this level, aged 55 to 60 years old,” said Knapp. “You recognize that you’ve only got so many years to be competitive as new players come into the age group every year.”

In the Super Senior Division, Brian Rothaus from Five Ponds Golf Club took the title which was primarily fueled by his runner-up performance in the Senior Amatuer Championship and a third place finish in the Art Wall Memorial.

“Coming off winning the GAP Player of the Year in 2021, it is a huge honor to be named State Player of the Year this year,” said Rothaus. “I’m not necessarily a goal-oriented person but I just love to compete with the group of guys that play in all of these events.